Skip to content
Cart
Free shipping On All Orders

I have used a lot of different types of jump ropes over the decades. The Ballistyx jump rope is the best I have used so far. It weighs a bit more than a lot of jump ropes (the handle weight I noticed immediately, but have grown to like this heavier weight). Therefore, for the light weight rating I gave it 5 stars because I like the heft – some of my other jump ropes seem too light now in comparison. There are a number of aspects that I appreciated. The cables are flexible enough that the wires don’t end up with a permanent bend in them near the handles. I have used some other jump ropes that have that issue. The cables don’t seem to get tangled as much as other ropes I have used. I keep my jump ropes on hooks in a closet rather than coiled up, but some other cables seem to retain the curl from when they were made and shipped. There is a tradeoff between thinness of the cable and speed. Thinner cables have less wind resistance, but there is not enough mass/density to twirl them fast enough. The two cables that are providded (one for speed and one for power) are a nice touch to solve this physics problem. I like the handles’ thickness also. I am 73 and the thicker handles are easier to hold than some jump ropes that have relatively thin handles. I have jump ropes with longer handles, but these seem long enough to me. I normally jump on the concrete patio in our back yard, and I have not noticed any abrasion of the jump rope cables in the week I have been using them. Of course, I try not to hit the cement with the jump rope (!), but it does occur often enough that it is something to consider. Nevertheless, I took advantage of the coupon that came with the jump rope to get a free speed cable. The engineering that went into the issue of adjusting the lengths of the cable and the smoothness of the twirling is well done. Also, I have not had any problems with the cables coming loose during exercise. I am very pleased with this product. Jump roping is a terrific exercise for all ages (I have severe arthritis in both knees from Viet Nam injuries, but if you jump rope properly it actually is a fairly low impact exercise), and this is a great jump rope to get started with again if you haven’t jump roped in a while, or to replace an older jump rope. Watch the free videos on line to learn the finer points of jump roping. They were a good review for me, bringing up some points I had not thought about in a while, including how long the jump rope should be.

I
I.
Entry Level Rope

Pretty solid rope , it gets the job done and has nice technology involved in it. With the adjustable ball bearing. I would recommend this rope to a lot of entry level jumpers. It is not a speed rope so it is extremely forgiving and easily worth the price. The handles are a bit big but I got used to it . When ever I buy a new JumpRope I give it 3 tries no matter what before I return it. The first time I will say I didn’t like it because I wasn’t finding my rhythm as fast as I usually do . The second time I could tell I had some muscle memory and the third time I had found my sweet spot. I return a lot of ropes but this one can stay in my collection . I do wish the handles were a bit grippy instead of smooth. Would also like to see the handles taper inwards for easier rotation . If the handles do stay the same on the second series if they make one I would also like the back end of the handles to offer a bit more weight

This comes in a lovely presentation box with clear simple instructions of how to get it to the right length for you. I watched some of the videos and sniggered at the idea I would ever be able to do more than a basic skip, but actually the videos are really useful and with a bit of perseverance I’ve been able to really up my game. Love it and glad I bought it.

First impressions were to be highly impressed when this arrived, nicely packaged and lots of spare connectors should they be needed. This came with two ropes so perfect for variation in training. Really easy to assemble and I loved the fact that there is loads of cable which can easily be adjusted to a shorter length if needed. At 6ft tall this has been an issue for me in the past but not with this set.
The non slip handles are nice and weighty but also doing get sticky when you have worked up a sweat.
Wish I had this sooner when I was developing my skipping technique.

A
A.
This rope really works!

I am very pleased with this jump rope. It came with an ample length in the event it needs to be cut. It is aesthetically VERY pleasing. The picture on Amazon does not do it justice. It has an emerald-green color in natural light. It makes me wonder if the red one is ruby red. I wish the handles were softer. Others before have mentioned the sparseness of the silicone grip on the handles. There's only about a two-inch length of it placed midway on the handles. It feels pleasant, but alas! I might augment my handles with something so as to make it easier to hold. 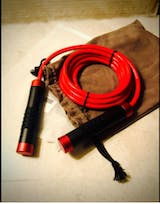